It’s the middle of winter.

You’ve just skied into your remote cabin, back in the wilderness, far away from ‘civilization’. 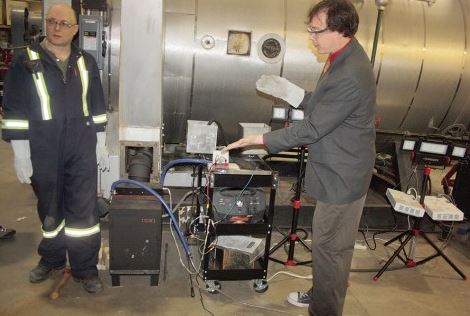 You take off your pack, go inside, get a good fire going in the woodstove, then got to bed for a well-deserved sleep.You get up the next morning, flip on the lights and fire up the coffee machine. Wait a minute.You’re out in the middle of nowhere, and you can casually flip on lights and a coffee machine?

That’s the way Oro Barton sees things happening in the possibly near future. Barton is a researcher with the Applied Research and Innovation Department at the College of New Caledonia, and his most recent project was producing electricity from the heat of a wood stove Using a TEG Generator from Tecteg Mfr.. On Wednesday, he and power engineering co-coordinator Stephen Davis demonstrated the first results.

“We had to get special permission from the city to hook up this stove inside city limits,” Barton explained. “It’s non-compliant with regulations because of the modifications we’ve made.” He said the research was funded by a grant from the Omineca Beetle Action Coalition.

“In many ways, we feel this is a better source of energy than solar panels.” he said. “You can control how much wood you use and how much energy you get.”

Davis said it was also a case of taking something you were using already and getting extra benefits out of it.

“A lot of times in winter, you’ll be running the stove 24-7 for heat the building, but you don’t need power all the time. This system would let you store that power in a battery for when you need it.”

Barton and Davis got the fire going in the stove and, within a few minutes, a light came on, powered by the energy produced by the fire.

“We’re also going to be able to now start powering up this generator,” Barton said. “We’ve already put some power into it, because it does take a while to power up, and we wanted to have it available for this demonstration.”

He plugged in another set of lights, which he said were the kind normally used in greenhouses to provide light for the plants outside of daylight hours.

“This is the main function we were asked to look at,” he said. “Could we produce enough power from the stove to provide a couple of extra hours of light a day for greenhouses?”

Having produced a working prototype generating around 40 watts, translated over 24 hours would be just under 1Kw/h. They were ready to move onto the next step.

“The first phase is inventing the technology. That was already done before we started. The second phase is making it work, which is what we have been doing.

“The third phase, the next one, is to deploy the technology for people to use.”

CNC researchers are now looking for industry partners to help with further develop the technology.